I have gotten a lot of things done this month.  It was not one big project that presented itself well in a posting.  It been a stead focus on small details that added up to something.

I greatly enjoyed my candle carousel that was on the shelf in my Christmas house.  Its a mini version of a German Christmas decoration that uses the heat of the candles to set them in motion.  I would gently blow on my mini version and watch the blade rotate the carousel. It would make me smile each time.  It was also fun to share this with my little granddaughter when she was visiting.

Pardon the pun –but it set my thoughts a whirl with the desire to create one myself but not Christmas related.  I had worked with some silhouettes on another project. So that was the beginning. Combining those ideas was the path I followed this month.  I spent many hours fine tuning to make it work smoother than the first attempt. 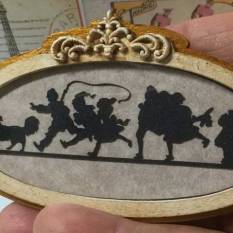 The trail of what if I tried this, or this, or this kept the impulse going.  I created the first one based on the silhouettes.  That was so much fun that I decided I wanted a heart one being that it was February and there were hearts everywhere.

When I finally got them to the finished stage I was so excited with my new toys that I wanted to share them.  The magic of these carousels are not captured in a single photo.  Motion tells the story.

So it lead to me making a you tube video of each of them working.  That was something new for me!  I do realize that this is super basic for some people but I hadn’t attempted one before.  It seemed very intimidating and I never had something to share that way before. It was much simpler to do that I ever dreamed.  It really made my day to learn a new skill!

I didn’t have a set path to begin with but followed the breadcrumbs of experimenting that lead to my carousels and making the videos.

I do have the carousels available as kits on the website (also learned to put the video there too) and some assembled on the Etsy site, if that is of interest to you.

I urge you to follow a creative whim occasionally.  You might be surprised by the unexpected pleasure of the journey!