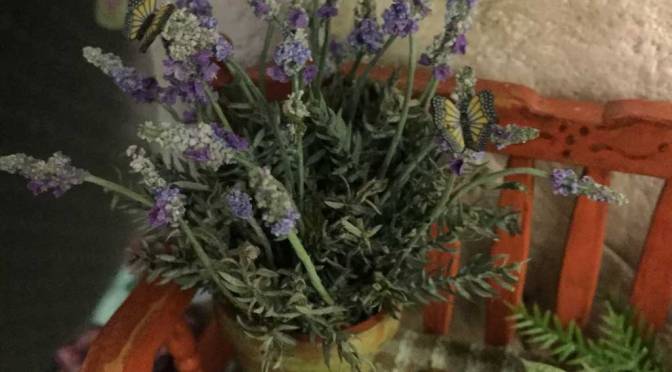 I had bought a half done project at a miniature show auction some time ago. It was a cottage from a Rik Pierce class. They are a lot of work but so beautiful when done. The structure was glorious but the exterior landscape had a swampy wetland with all kinds of creatures.

The previous owner’s intent was for a witch’s cottage. That was not an interest of mine. What to do with the poured resin swamp had me stumped. So it sat all this time waiting.

Finally, I started to play house inside the structure this summer and ignored the exterior. A plan of action developed. The fantasy of a place away from the busy world tucked away in a woods emerged. The cottage began to have a personality – I pulled out the barren tree (so much easier in miniature than real life!) and covered the swamp with paper clay to get a landscape to support flower beds. This then sat for several months without any further work. The reality of how many plants this involved overwhelmed me.

Not today – another day – was my response each time I started to think about it UNTIL an unexpected Christmas package arrived! My friend, Loretta Kasza had been talking about creating and making plants this fall but I hadn’t seen them. She sent me a batch of them!

I think my cottage had simply been waiting for them! They were just perfect! I wish had had photographed before planting but didn’t plan that far ahead. So here is a peak of them in the ground so to speak.

Flower beds emerged! Combined with my stash of plants collected over time, Loretta’s foliage plants and filler materials it became a lush cottage garden that I could envision enjoying living there in the cottage. 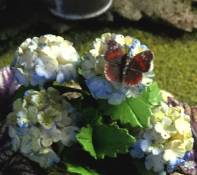 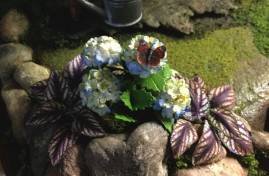 A fimo butterfly from Lola’s Originals (in a drawer far too long) now rests on a hydrangea flower. Two of Loretta’s spectacular variegated plants show off the hydrangea bush.  Then for fun, I added the dandelion growing in the rocks, it seems the gardener missed that one.  The dandelion is by my friend, Twilla McKee.  The corner became a composition with all the elements working together. I was thrilled!

Another butterfly sits on my prize rose bush ( I can grow them in miniature it seems versus reality it is not so pretty. Kansas weather is rather harsh on them here). Another plant from the drawer stash. Along with a cadmium made ages ago.

I even had some creatures to add to the garden. The path around the corner has a toad and a snail peaking out from the greenery. The lovely hosta is another of Loretta’s treasures.  Can you see the ladybugs added to the plant to keep the aphids away? They were another forgotten treasure from the drawer stash. 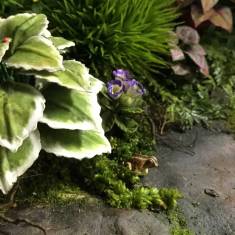 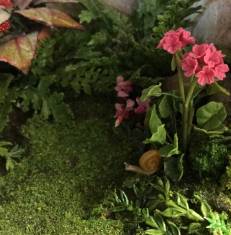 A timid traveler in the garden

A pot of lavender on the bench by the door has a few more butterflies. Sitting beside it are a few vegetables harvested from the garden to add to the stew for supper tonight. The lavender is by Maryvonne Herholz. The bench is by R-stuff.

No garden is complete without birds. A bird’s nest is tucked in on the porch roof and a chickadee is resting on a shutter momentarily add to the scene. 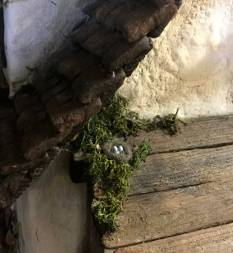 a nest tucked in a quiet spot on the porch roof 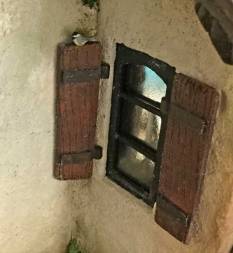 resting for a moment

It all pulled together and became a magical place to wander off to when I need time away from dirty dishes, laundry, etc. . Don’t get me wrong, reality is fine  but an occasional daydream wandering about in a FINISHED setting gives me a perk of energy to return to the mundane chores of daily life.

Now for the tour of the garden that I have been hinting about….

with the next posting….