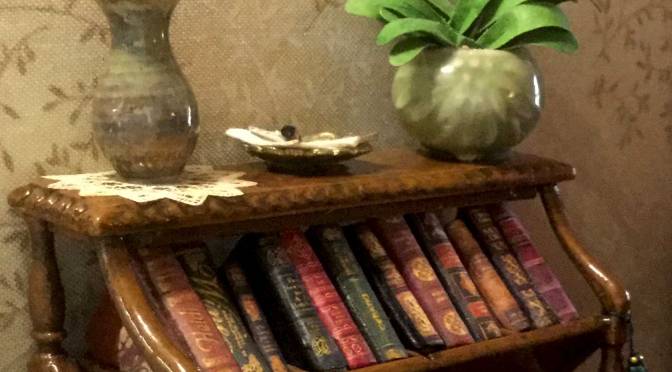 It is odd how this room created the story of this home’s inhabitants. I didn’t start with a story and build a dollhouse around it. I just was going to create a dollhouse from a structure I had brought many years ago. I had played with many ideas but never loved one idea enough to begin it. So it sat waiting. Also, I wanted to conquer the fear of wiring an entire structure. I have mainly stayed with roomboxes. A mighty ambitious plan but you know how fired up you can be on New Year resolutions. I will not state what year but it wasn’t 2016 goals. It has been a meandering path but I think it may be finished this year. I am saying that quietly and with fingers crossed.

Determining what each room was going to be was the first thing – sewing room, servant quarters, bedroom, a child’s room, entry hall, stairway nook and the drawing room. This is so a wiring plan could be planned and laid out under flooring and wallpaper. Each room’s function  was dictated by a stash of furnishings that I wanted to see in use instead of storing away in boxes. Someday had arrived. Use it. Modifications were made to the original structure to accommodate these rooms and the wiring. Also, I wanted to be proactive to be able to get to things if the lights didn’t all work later. Nothing more frustrating that a dead light that you can’t fix long after it is done.

I pulled out furniture and played house to get a feel for what furnishings would work. It was OK but it had no life to it. Yes, it is a dollhouse but for a miniaturist it is a world, a place, that if it were physically possible we would go there. As a reality check, I know it is not possible BUT imagination plays a large role in this hobby.

The orchids are important.  Orchid Hill House became the home’s name.  An older woman, her daughter-in-law and a granddaughter are the house inhabitants. This is due to the dolls and the rooms they seem to fit in.  There are no men in the household at the moment except for the butler.  This is due to the father and son off on a voyage exploring for new orchids.  The ladies gathering in the drawing room are meeting for the monthly meeting of the orchid society. Now there is life and a purpose to the inhabitants residing here! All because of a staircase nook, that I now can imagine my lady writing her letters to husband and son far away or completing her notes for the talk this afternoon to the ladies at the orchid society meeting.  Imagination crawls out of hiding sometimes and leads you down a path you were not expecting.  That makes my day when it happens!

Fall has been good this year with a refocus on my miniatures with a renewed outlook.  I have had time to made decisions on two projects that I was stuck on.  I am bound and determined to make headway and hopeful finish them. I am a novice on this blogging project so bear with me learning. I am going to see saw between the two projects if it isn’t too confusing.  I am working on both of them at the same time.  When I need a break from one I switch to the other one.  Both have had long incubation periods and are pass the beginning phases.  They are stuck in the middle and need to progress to a FINISHED stage.

So this is the journey from the middle to the end.  I will be better at the whole journey story on the following projects upon completely these two structures. You have to start somewhere, right?

Today’s story is about Orchid Hill House.  It is an attempt to complete an electrified house instead of a roombox.  I have mainly done roomboxes and not a complete structure with multiple rooms that need the wiring all tied together.  It has been a lesson in planning electric layout. Hence, a lot of stop and starts.  Saga of a stuck in the middle project.

First rule of miniatures for me is that if it is yours you can do it however you want!  It is not graded or have to be done a certain way.  So it may be crazy but I abandon the front facade of the structure and made it the back.  I don’t have a turntable base for it and when I want to look at it, I want to see the inside scene not the outside windows and front door. So my point of view is looking to the interior rooms without peaking thru windows or a small doorway.

Here is the original kit picture. It was a Real Good Toys Model #PR-225. 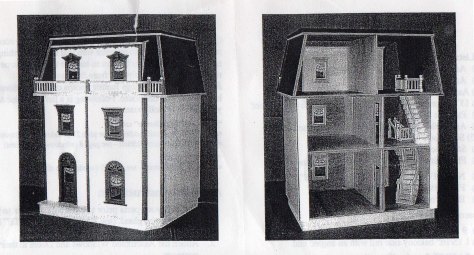 I changed many things to make it MINE.  Good or bad, it is mine.  Walls changed and only put the first part of the staircase in.  You have to imagine the stairs being somewhere just not visible in the view.  I didn’t want all the space wasted with a staircase getting to the top floor. I covered the window on the left room on the second floor and added a smaller servant’s bedroom on the 3rd floor. I removed the right railing on the staircase.  It looked awkward and had the brilliant idea of having a curved wall (how to do it wasn’t worked out at the time-just that was going to be -yikes).  If you haven’t figured out that created quite the stopping point for a length of time BUT happy to report that is finally figured out and will give the how to info on that in another post! 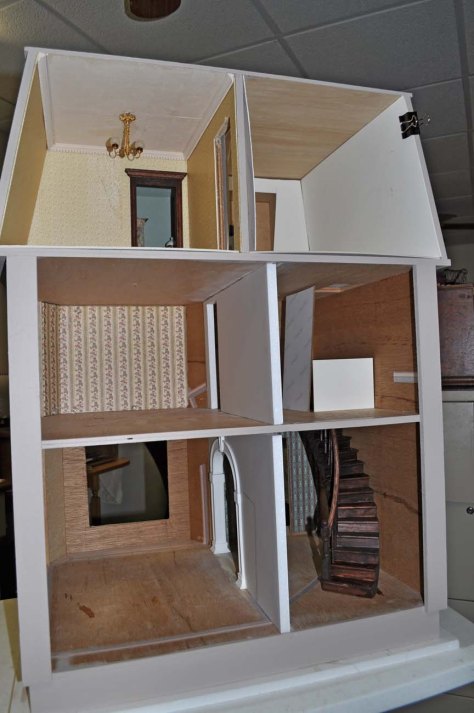